The findings below are based on the project team’s chapter in the Handbook of Research on Study Abroad Programs and Outbound Mobility and the project’s final OLT report.

This study attempted to reveal the critical components of short-term study tour preparation, identify who is currently responsible for providing this preparation, and the ways by which preparation may be improved. Our findings revealed that appropriate pre-departure preparation is a critical factor contributing to positive student perceptions regarding their short-term study tour experiences. In addition, the study has also underscored the crucial role played by staff, the University, and student themselves, in relation to preparation.

Eight academic study tour leaders and three administrative staff members who had recently participated in short-term, intensive study tours of two to four weeks duration were interviewed to learn about how they prepared themselves and their students. Participants from the University-organised Asia study tours had travelled to Indonesia, Cambodia, Malaysia, Hong Kong and China. In total, five student focus groups comprising 32 students were asked about their thoughts and experiences regarding their preparation for study tours and placements.

For students, adequately preparing for their study tours was viewed as a way to alleviate anxieties and concerns they may have regarding travelling to a foreign destination. Travelling to an Asian destination, in particular, were identified by students as being different to travelling to a Western country, largely in terms of the practical preparation needed. Examples included knowing about acommodation, health, safety and risk, food, culture, language, responsibilities and expectations. Students relied mainly on the study tour leaders to inform them regarding what they needed to know beforehand, and what they could expect from the trip. They were more likely to be satisfied about their study tour experiences if they felt that they had been provided with comprehensive and useful information about the programs, well in advance. Overall, although students identified gaps in the preparation and delivery of their study tours, they were overwhelmingly positive about their experiences.

Staff were more likely to cite logistical, practical and workload challenges when describing how they prepared their students for study tours. Another frequent issue raised by staff was dealing with students’ expectations and the challenge of managing group cohesion, given the time constraints inherent to short-term, intensive study tours. Staff also highlighted the importance of being well-organised and well-prepared for their roles. The perceived, ideal qualities embodied by program organisers included being passionate about their role, being self-motivated and having relevant travel and administrative experience. Support from their institutions was another key component in the successful preparation and running of the study tours. Concerningly, staff felt that they were not adequately supported by the University. Specifically, they mentioned a lack of resources, administrative support, training and guidance.

Professor Darla Deardorff,  Executive Director of the Association of International Education Administrators at Duke University, speaks on the amount and various types of preparation that staff who organise and run study tours need to undertake (and also provide to their students).

The Five Main Categories of Preparation

The figure below shows the distribution of the five main categories of trip preparation, based on analysis of responses from students and the University staff members who participated in the study. The categories are described in more detail, as follows: 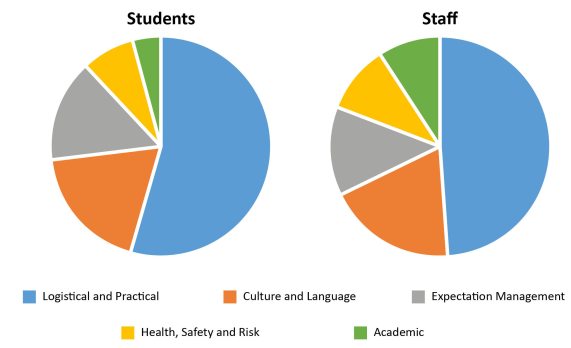 A former participant from a University of South Australia Global Experience study tour provides a brief description of what aspects of the preparation workshops she found useful:

Below, several former University of South Australia Global Experience study tour participants provide examples of how they prepared themselves for their intercultural experience, when it came to learning about culture and language.

A former participant from a University of South Australia Global Experience study tour described how she prepared for the academic component of her program:

Of the five study tours that were involved in this research, only one study tour had hired an external administrative assistant in the host country, to assist with logistical and organisation aspects of the study tour. This was seen to be more cost-effective than bringing an administrative staff member from the home University, even if the staff member in question had already been heavily involved in the planning and organisation of the program. Another study tour engaged a professional liaison from an external organisation that facilitates internships. The role of the liaison was to assist communication with program partners in the host country, and to coordinate activities. The study tour leader who utilised this particular service cited that the benefits included having a person ‘on the ground’ who was familiar with the host country and had established networks and resources that could be called upon.

Despite nearly all staff members mentioning the heavy workload and responsibility, particularly in relation to the logistical and practical aspects of preparation, staff nevertheless highlighted positive aspects of their study tour organisation experience. For some staff, the major successes of the study tour came from the opportunity for both staff and students to form relationships with their country hosts (such as mentors or buddies).

For other staff, successful study tour programs were not just about what happened while on the study tour, but was also about the sense of satisfaction, and the recognition achieved from leveraging the successes of the program and facilitating useful networks once the students were back home.

Some staff spoke about the unique, life-changing experiences gained through the study tours. In many instances, there was the perception among staff that despite the challenges of organising and managing such programs, the outcomes were worth the effort.

In terms of positive aspects pertaining to institutional or external support for the study tours, funding provided through the institution and/or through the Government was cited as a valuable contributing factor that enabled students to take up the opportunity to participate in the programs, and allowed tour leaders to run more successful programs.